Underlying every aspect of the village until 1938 was agriculture. Twenty-six farmers were listed in the 1855 Directory. However, the coming of RAF Waddington I 1938 effectively destroyed most farms. Others had already gone. Nevertheless the majority of people remember life on these farms eighty or even ninety years ago.

‘Most country boys had not much choice of a vocation other than farm work.’ It was normal to start work from 6:30 in the morning to 5:30 at night in the summer, except at harvest and hay making, and seven to five in winter with a lunch break from 8:30 to nine and dinner from twelve to one. The boys’ ambition was to be able to work a pair of horses and use them to plough. At fifteen they were hired for the year and left home to live in on the farm with the foreman, May to May. ‘This happened to me for the sum of £5 plus board and lodging for a whole year. We were paid annually.’* This payment was then increased to nine pounds, and then £15, according to ability.

There were three or four grades of farmworker, horsemen, stockmen (‘gathmen’), shepherd, labourers. The horseman’s hours were 4:30 in the morning to (approximately) six at night. A single man, as head waggoner, could earn £24 to £28 a year, but would have to carry corn from the threshing machine up a plank into a waggon. Each sack weighed sixteen stone (barley), eighteen stone (wheat), nineteen stone (peas) and twenty stone (beans). There were no half-days off before 1918 and no paid holidays. 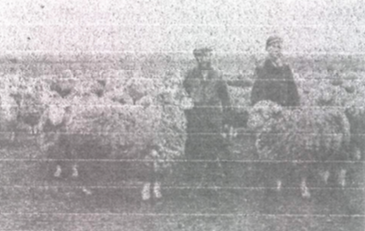 * Written by Mr. G. Butler, by whose permission we quote it.

** Mr. Butler’s father was a shepherd on Waddington heath, now MOD property. See the photo of him with two prize rams on the Heath. In 1847 the Lettings Book shows that mainly sheep grazed the Heath verges, but any animals except pigs, could graze elsewhere if in charge of a tenter.

At the end of the 1913-18 war all grades got increases. ‘I left the farm as a waggoner to wor for the RAF for an increase of four shillings and no weekend work.’ When war came again in 1939 and civilians were redundant, some went to work in Lincoln for £3 a week. ‘I thought I was well off!’

From Mr. Charles Watson we learn something of the life of a farm servant about 1910. First breakfast was at six in the morning – a pint mug of milk with a thick hunk of bread and cold bacon dipped in. At nine there was a snack in the field of thick cold bacon between bread. The next meal was 2:30 when the horses had been ‘seen to’ – more boiled bacon, preceded by pudding, and cold tea. At eight in the evening they had to ‘supper up and bed down’ the horses. They had their own last meal, with bed at nine, when the key was turned.

George Rylatt recalls that in late spring and summertime they were all up at dawn – the waggoners, their footsteps heard on the High Street at half-past four to feed their horses ready for work at half-past six; the gathmen to bring the cows up from the Lowfields Meadows down Milkinghill, for milking at half-past six; and at half-past three in the afternoon ‘a little old boy’ away from school that day, would bring the up swinging his long stick. The village street was jammed with the ambling, heavy-uddered animals. Dobsons of Ashwell Farm milked sixteen cows. There were at least seven farms in the High Street then.

Mrs. Watson recalled that, as the daughter of a farm foreman at Branston Mere, she went into service and ‘stood’ for hiring at Sleaford. The hiring bond was sealed with the ‘fastening penny’ of one shilling. Places were for a year and her wage £16, food only provided. On Wednesdays and Saturdays she would cycle home on evenings off. Holidays were a week in May and a few days at Christmas.* 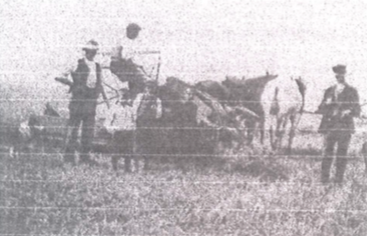 * Most girls born 1900-20 appear to have gone into Service, but there is no evidence of the hiring custom continuing so late.