Having sufficient water is essential to a parish. Having insufficient means, for instance, that fires are more difficult to fight. A fire in 1840 damaged the Glebe Farm, on Waddington Heath. Also, stacks and a thrashing machine that stood ready for work, were set on fire in 1868. The yard was where numbers 5 & 7 Station Road now stand.

Yet nature could supply a surfeit of water to devastating effect. Not only would the Witham flood but heavy rains through the 1870s caused loss of crops and animals, reaching a climax in 1879 when many farmers were ruined.

So water, in a sense, has long defined Waddington, not only literally, with the Witham forming a natural boundary between Waddington and North Hykeham, but underpinning the village with a fresh water supply exploited by digging down to it.

While drinking water for the cattle came from ponds and the river, drinking water for the people in Waddington came from the wells or water pumps, sited close by where they lived. The water supply was sometimes the cause of an epidemic, and the schools would have to close. At times the seepage from the dung piles gave cause for concern. In 1915 Waddington applied for a water supply but it was not until March 1930 that Lincoln City Council agreed to lay mains and supply water to Waddington. 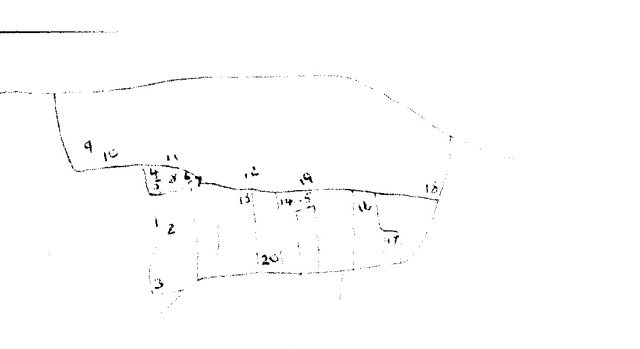 Some known sites where the people of Waddington obtained their fresh water.

All of the above is based upon the notes of the late Jean Tower, Waddington Local Historian.

[1] Messuage – a dwelling house with outbuildings and land assigned to its use.

Other notes about siting of wells and pumps in Waddington.

Water pump outside High House wall in Rectory Lane. Told to J.Haddock by a visitor in 2016.

A well, now filled in a driveway opposite High House in Rectory Lane, still reappears as a depression in the drive.

Thanks to Waddington History Group for access to their archive, from whence all of this information was abstracted.

In November 2000 water poured down from the ridge and Redwood primary school was flooded and the fire services laid hoses along Hollywell Road to pump out the field drains. The creation of the current flood defences was a direct result of this event.

The photographs which follow, taken at the time of construction, are courtesy of Michael Hudson, who was a councillor at the time and actively engaged in promoting the flood defences.